Posted at 09:45h in Food, Lifestyle by EcoPack 0 Comments

Hailing from Morocco, this dish is full of North African flavour! Tagine is named after the pot in which it’s cooked, and a tagine is a pot that seals in all the flavour. Moisture rises us the sides of the cone-shaped lid and then comes back down to baste and re-flavour the slow-cooked dish. If you don’t have a tagine, your next best option is a slow cooker. However, as this dish can take hours to make, this 40-minute version is the easier option. It can even be an introduction to the world of cooking traditional tagine one day.

Apricot, Butternut, and Chickpea Tagine from The Doctor’s Kitchen

Heat the oil in a large pan on medium heat. Add the onions and cook for around 5 minutes until softening slightly. Add the garlic and cook for a further two minutes before adding in all the spices and harissa paste and again cook for another few minutes, stirring well to combine all the ingredient whilst cooking.

Add in the chunks of butternut squash, vegetable stock, apricots, salt and pepper and chopped tomatoes and cook for 15 minutes until the butternut is tender.

Add in the drained chickpeas and cook for a final 10 minutes. Taste for seasoning before adding the fresh parsley.

Serve with cooked grains such as couscous, quinoa and some natural yoghurt.

How does this North African spiced dish compare to our traditional South African foods? 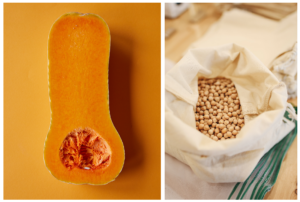 #meatfreemonday, tagine, vegetables
× How can we assist?